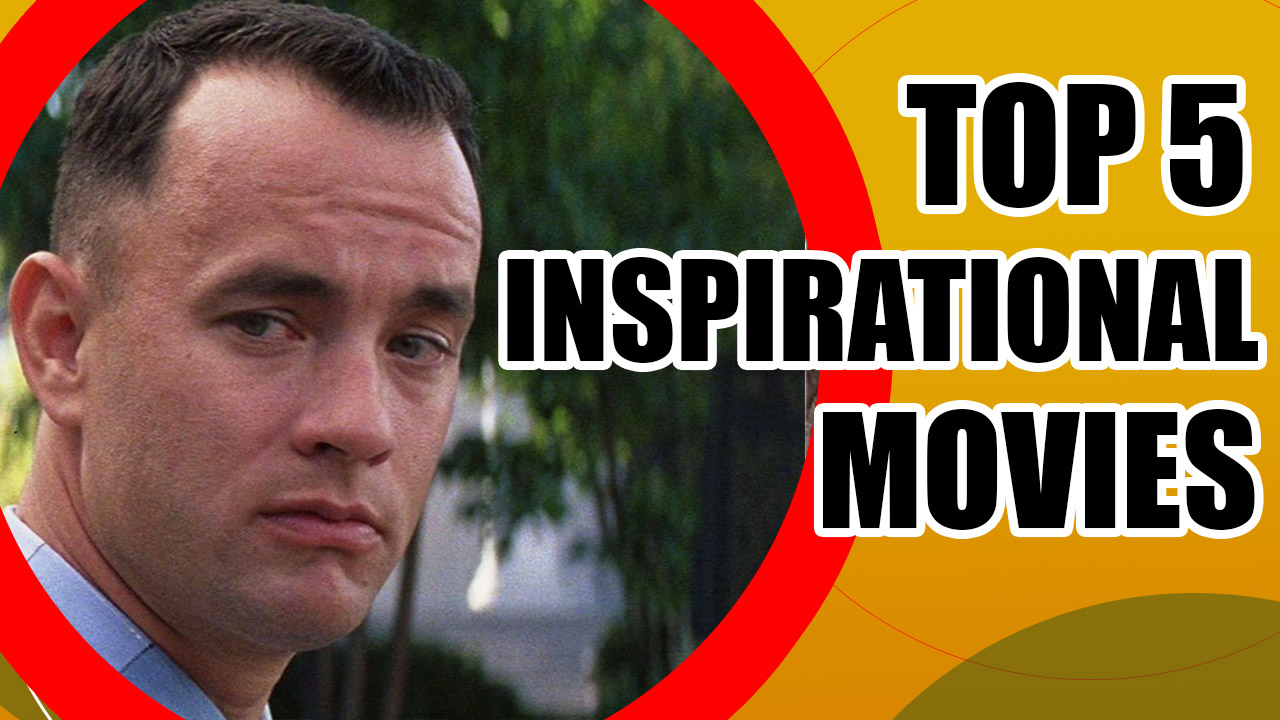 A great film strikes through to the heart of what it means to be human, inspiring the mind and moving the spirit and in today’s video we’re going to be counting down the TOP five most inspirational movies ever made and why you need to watch them.

What exactly makes a movie inspirational? From underdog stories, to tales of incredible transformation, the overcoming immense hardship, and the journey of an average person to heroism.

Such tales stay with us forever and inspire in us something that we never knew was there. Whether you are looking to be motivated, want to discover a new dimension of humanity, or are looking to be woke the hell up, then keep on watching. These are some of the most inspirational movies of all time, and if you find this video interesting, don’t forget to give us a like and subscribe to be alerted when we post new videos.

At number FIVE is: ‘The Shawshank Redemption’. Based on a novella by Stephen King, the film is a harrowing tale about the triumph of the human spirit.

The story follows a banker named Andy Duphrane who’s wrongfully convicted of killing his wife and her lover, and is sent to the Shawshank maximum security prison where he befriends another inmate named Red. Starring Tim Robbins, Morgan Freeman who give outstanding performances, the film is powerfully poignant.

Although the film didn’t set the box office alight upon its release, it went on to become a classic after finding its audience on VHS and is now considered one of the most inspirational films when it comes to not losing hope when all seems lost.

With one of the most uplifting and emotional endings to a film that you’ll ever see, this film is a testament to the human spirit.

4. The Secret Life of Walter Mitty

At number FOUR is: ‘The Secret Life of Walter Mitty’. For those who have not seen the film, this might seem like an odd one. It does not occupy any “great American classics” list and it didn’t even make much noise when it was first released in 2013, but this movie starring and directed by Ben Stiller is inspirational for several reasons.

Walter Mitty is a story we can all relate to. It’s about someone who has ended up living the life he was never meant to live (in a way) and sets out to find himself– who he is and what he’s meant to do– by taking an incredible journey around the world, realizing several important lessons along the way, before he arrives back where it all started.

If you feel a bit lost, love epic inner journeys where one must find themselves, and enjoy Ben Stiller (he is awesome in this), then you will love The Secret Life of Walter Mitty.

It shows why it is important to chase after your dreams and is an enjoyable take on modern man’s existential crisis.

Owing to itself possibly the single most well-known line in cinematic history, Forrest Gump is the kind of film that everyone needs to watch.

First, its historical relevance is incredible. For someone who was born in the mid-80s, Forrest Gump is an incredible journey through several decades of American history which many may not be familiar with; and it illuminated these moments in history in an up-close way that history books could never do.

Second, more than just a basic story of triumph over adversity or realizing success, Forrest Gump just feels like…well, life! It is not all good, or all bad, it is everything and all kinds of different things all at once.

It is one of the only movies that somewhat correctly portrays what it is like to live– a complicated mess where we, hopefully…eventually, come to a place where we figure it all out. At least enough to be happy, and if that isn’t inspiring, then what is? If you somehow haven’t seen Forrest Gump yet, well, you might need to check your pulse. Otherwise, watch it and enjoy.

At number TWO is Steven Spielberg’s masterpiece: ‘Schindler’s List’. There are few films more powerful and important than this 1993 winner of the Academy Award for Best Picture, but that is not why you should watch this film. Based on a true story, Steven Spielberg’s Schindler’s List stars Liam Neeson as Oskar Schindler, a German businessman in Poland who sees an opportunity to make money from the Nazis’ rise to power.

Watch it for the brilliant storytelling, great acting, and its message that one person can make a difference in the face of evil.

With seemingly effortless grace and skill, Schindler’s List balances fear and exaltation, humor and horror, love and death. It evokes, superbly, a time of savagery and grief, and the inexplicable, stunning compassion that rises within and against it.

Although the horror of the subject this film deals with is undeniable, the film is ultimately uplifting and shows why you can never give up on hope, even in the bleakest of situations imaginable.

And at number ONE is the classic 1946: ‘It’s A Wonderful Life’ directed by Frank Capra and starring James Stewart.

The holiday classic to define all holiday classics, It’s a Wonderful Life is one of a handful of films that are worth an annual viewing and is sure to uplift and inspire everyone who watches it.

The film stars James Stewart as George Bailey, a man who has given up his dreams in order to help others, and whose imminent suicide on Christmas Eve brings about the intervention of his guardian angel, Clarence Odbody (Henry Travers).

Clarence shows George all the lives he has touched, and how different life would be for his wife Mary and his community of Bedford Falls if he had never been born.

Despite it initially getting mixed reviews and being considered a box office flop, the film has become a classic and is a staple of Christmas television around the world.

The change in reception was helped in part due to a clerical error which put the film into the public domain, allowing it to be freely shown anywhere without licensing or royalty fees.

It’s a Wonderful Life is now considered one of the greatest films of all time. It was nominated for five Academy Awards, including Best Picture, and has been recognized by the American Film Institute as one of the 100 best American films ever made.

Not only does truly exhume the holiday spirit, but it also reminds you that you should be good to everyone, even when the world turns you down again and again.

The inspirational, thoroughly festive ending is guaranteed to bring tears to the eyes. It will restore your faith in humanity and change your outlook on life and that is why It’s A Wonderful Life is the most inspirational movie ever made.

We hope that you feel inspired and motivated by these top movies.

Please leave is a comment and let us know! and don’t forget to subscribe and set the bell to be alerted when new videos are posted!